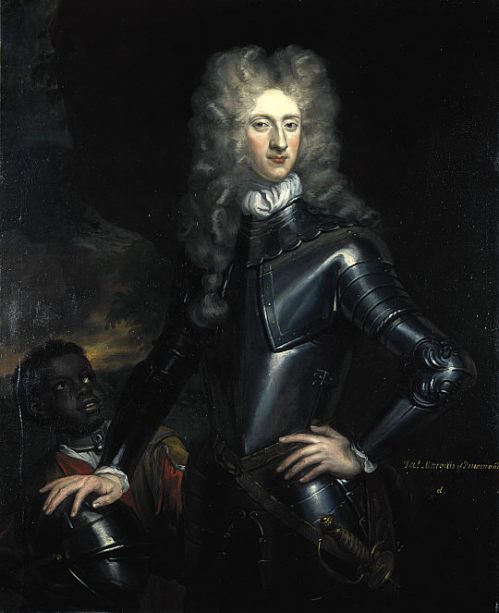 I believe this image is as good a place to start as any in this densely argued book.  In his Preface, Gikandi describes an early moment of fascination in the National Gallery of Scotland, where he saw this portrait of the Jacobite James Drummond by Sir John Baptiste de Medina.  As he looked on this painting, with its conscious, almost theatrical projection of power, Gikandi began to wonder:

Why would Drummond, a symbol of the Catholic insurrection against the Protestant establishment, seek to inscribe an enslaved boy in his family portrait? What aura did this figure, undoubtedly the quintessential sign of blackness in bondage, add to the symbolism of white power?  What libidinal desires did the black slave represent? What was the relation of this blackness, confined to the margin of the modern world picture and placed in a state of subjection, to the man of power with his hand on his hip? And how were we to read this diminished, yet not unattractive, blackness in relation to the center embodied by the wig and armor?   And where was one to draw the line between the gesture of incorporation and dissociation? (xi-xii)

In some sense, I think it’s not too difficult to understand the relations here in the Drummond portrait as part of the theatrics of power, the way in which the “diminished, yet not unattractive, blackness” of the gazing, enslaved boy (signified by the collar around his neck) provides a readily comprehensible image of his, and by extension, our subjection to the armored, bewigged man at the painting’s center.  In this respect, the pairing seems at least comparable to our now familiar cultural repertoire of  assymetrical cross-cultural pairings like Crusoe/Friday, Huck/Jim, Lone Ranger/Tonto, Kirk/Spock, etc. etc.

In other words, de Medina’s pairing seems designed to demonstrate that the conquest has already occurred, and now a more subtle form of subjection has begun.  This is part of what I see at stake in these scenes of “incorporation and dissociation,” emblematized by Drummond’s helmet or Crusoe’s musket: 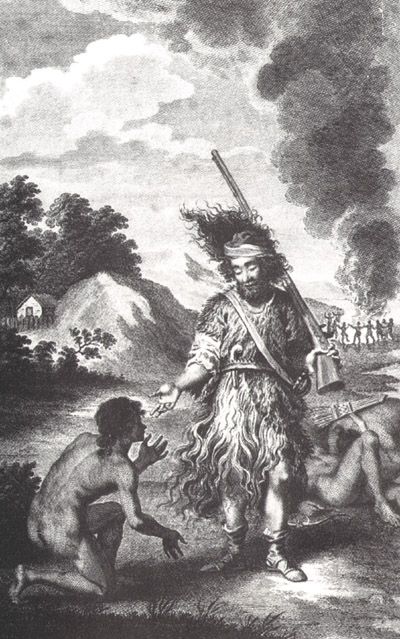 In some sense, as I’ve said in the comments, this story of subjection and hegemony has been hiding in plain view for some time, and I don’t think it has gone unnoticed in cultural criticism.  What Gikandi adds to this scenario of a visible “incorporation and dissociation” of the enslaved Other is a notion of the black as a source of libidinal energy for civilization and Modernity, one that requires regular maintenance, or “quarantining,” to be contained and yet productively nurtured:

What surprised me in the end, however, was the discovery that the world of the enslaved was not simply the submerged and concealed counterpoint of modern civilization; rather, what made the body of the slave repellant–its ugliness and dirt–was also what provided the sensations and the guilty pleasures of modern life (xii).

With this move into the “sensations and the guilty pleasures of modern life,” Gikandi has taken us into the peculiarly modern aesthetics of disavowal, what we thoughtlessly enjoy but cannot admit to having any contact with.  The libidinal pull of slavery and its  products is what takes us out of the purity and transcendence of Enlightenment aesthetics, and brings us into contact with something far more unsettling, the infrastructures of commercial modernity.  Drummond’s hand rests lightly upon his helmet, and Crusoe balances his musket on his shoulder, while these two figures set the terms for the “incorporation” of their black counterparts.

This entry was posted in collaborative readings, David Mazella, Gikandi. Bookmark the permalink.